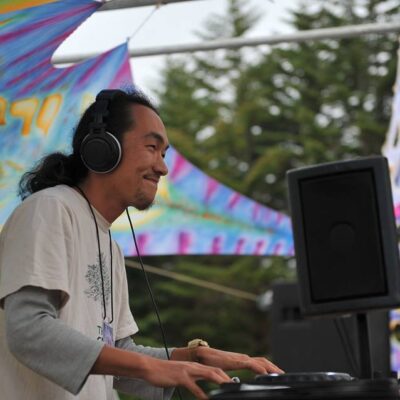 Accumulating inspirations from attending parties all around the world, in 2008 DJ Take started playing at indoor and outdoor invents in Tokyo.
Simultaneously, he started organizing an underground outdoor event, ‘My Little Sunshine’, which focused on enriching the ambience on the dance foor. He felt that most Japanese dance events were one diminutional, focusing too much on the music and not enough on the ambience and the vibe. Through the Sunshine events he has facilitated cross-cultural DJ exchanges, inviting artists and DJ’s from South Africa, Mexico, Morocco, and all corners of the globe whilst also getting invited to play oversees.
Since 2013, he has signed with Indian record label “Occulta Records” specializing in Dark Progressive Trance. He is the resident DJ of Occulta Records, pursuing the dark acid beats. He has established strong connections with the South African party scene and will host his second ‘My Little Sunshine ZA’ event over the New Year holidays in 2014. He has also been invited to play for the ‘Resonance NYE Festival 2013-2014’ in South Africa! He is organizing another dark progressive event ‘Fractal Geocosm’ in Japan. Make sure to keep an eye on his up-comingevents and projects!