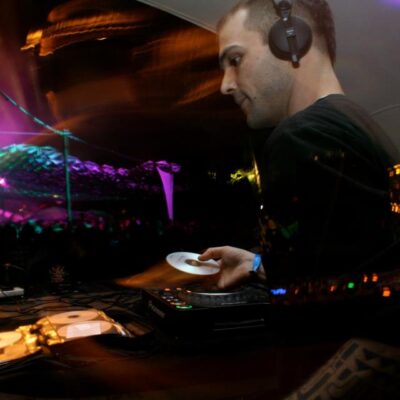 It all started at an early age – recording mix tapes for his friends to share his taste and vision of music. As a logical result of his deep passion for electronic music, he learned all about the mysteries of Djing and even ran a record Store called ‘Sonic Implant’ for some years.
Through time, he became a solid point of reference around Germany, and was booked to play his Sets at Fusion Festival, Antaris, Vuuv, Freqs of Nature – including important resident spots at Hai in den Mai and Wonderland Festival(Waldfrieden) from the early years to present.
His reputation brought him requests from all around the globe, so he got to play at festivals like Universo Parallelo (Brasil), Experience Festival / Moon Mountain (Thailand), Grasshopper / Overdrive / Wingmakers and Sunshine Festival (Japan), and Parties in Mexico, Spain, Netherlands, Italy, UK, France, Sweden, Denmark,
Czech Republic…
For sure, a peak in his DJ-career, was the release of his highly acclaimed compilation ’13’ on Blue Hour Sounds in 2013, where he had the possibility to express his vision of Psychedelic Trance and to promote the music he loves to
play in his DJ-sets.
Two years later his 2nd compilation ‘Cycle of Life’ followed the success of ’13’ onMaharetta Records.
Talking of style – Raoul’s is defnitely best describable as ‘straight forward andfriendly – with a hint of long forgotten elements of Goatrance’.
Apart from his pure psytrance Sets he now also rocks dancefoors with some deeper and darker progressive sounds.
In 2019 he happily joined Occulta Records where he is representing his dark progressive Sets.